American Ballet Theatre Principal Dancer and author Misty Copeland first made history in 2007 as the second African American to be promoted to the rank of "soloist" in two decades at the company. In 2015, Copeland made history for the second time, when she became the first African American female principal "dancer" in the American Ballet Theatre's 75-year history.  Copeland began her ballet studies at the age of 13, considerably late to begin the art form, but was immediately considered a bright star. A true prodigy, she was dancing en pointe within three months of taking her first dance class and performing professionally in four years—a feat unheard of for any classical dancer.

Bunheads, available Fall 2020, is the first in a series of children’s picture books inspired by Copeland’s early dance experience. She tells the story of a young Misty, discovering her love for dance through the comic ballet, Coppélia. On her first day of class, Misty is absolutely captivated by the narrative of the ballet’s story and entranced by the dance. Nervous, yet excited, she decides to audition for one of the lead roles. As she prepares for the audition and eventually the performance, she learns to lean on her newfound friends for inspiration, as well as her own can-do spirit to dance her very best. Featuring themes of teamwork, friendship, dedication, and hard work, children everywhere will be inspired to reach for their dreams through Copeland’s pictorial interpretation.

Copeland is the bestselling author of Life in Motion, Ballerina Body, and Firebird. She is the recipient of the Leonore Annenberg Fellowship in the Arts and was appointed by President Obama to the President’s Council on Fitness, Sports, and Nutrition. She was named to the "Time100", Time magazine's annual list of the world's most influential people and was one of Glamour magazine's "Women of the Year." Copeland has taken a special interest in mentoring dancers of color and diversifying ballet. She's responded to letters from young people around the world, including aspiring dancers, and remains an active supporter of the Boys & Girls Club of America.  Purchase a Misty Copeland Celebrity READ® Poster, limited supply available. 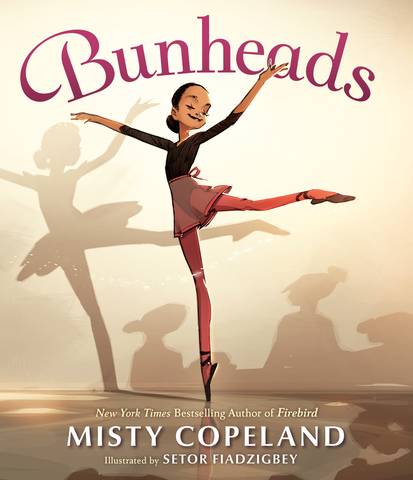