Sonia Manzano is a first-generation, mainland Puerto Rican who was raised in the South Bronx. In the early 1970s, a scholarship took her to Carnegie Mellon University, where she participated in the creation of the hit Broadway show Godspell. From there she went on to affect the lives of millions of children and parents when she was offered the opportunity to create the role of “Maria” on Sesame Street. ​

She is the author of several picture books, including No Dogs Allowed, A Box Full of Kittens, Miracle on 133rd Street, the YA novel, The Revolution of Evelyn Serrano, and the memoir Becoming Maria: Love and Chaos in the South Bronx.  Her new book, A World Together will be available Fall 2020, and is her first book with publisher, National Geographic.  Manzano says she “jumped at the chance National Geographic gave me to continue spreading the word of multicultural understanding through A World Together. Creating a presentation through words and pictures of how we’d like our world to be was exhilarating. I tried to make A World Together a refreshing take on a familiar theme. I wanted it to celebrate what connects us wherever we come from, whether it’s a block away or the other side of the planet. My hope is that it shows that what we enjoy and value—family, friends, food, play—may sometimes look different, but deep down is the same wherever you go.”

She is currently working toward the creation of a Bronx Children’s Museum and developing an animated children’s series with The Fred Rogers Company.

She has received the Congressional Hispanic Caucus Award, 15 Emmys for staff-writing Sesame Street, and the Hispanic Heritage Award for Education.  In 2016, she received a Lifetime Achievement Award at the 43rd Annual Daytime Emmys Awards. 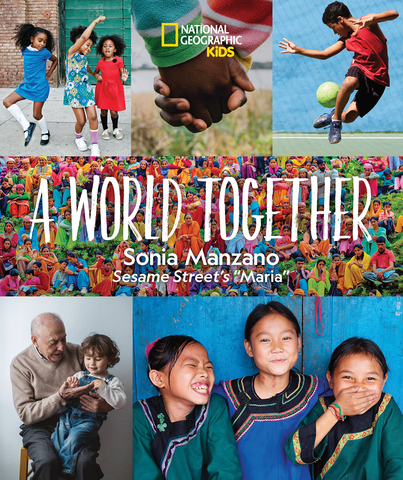